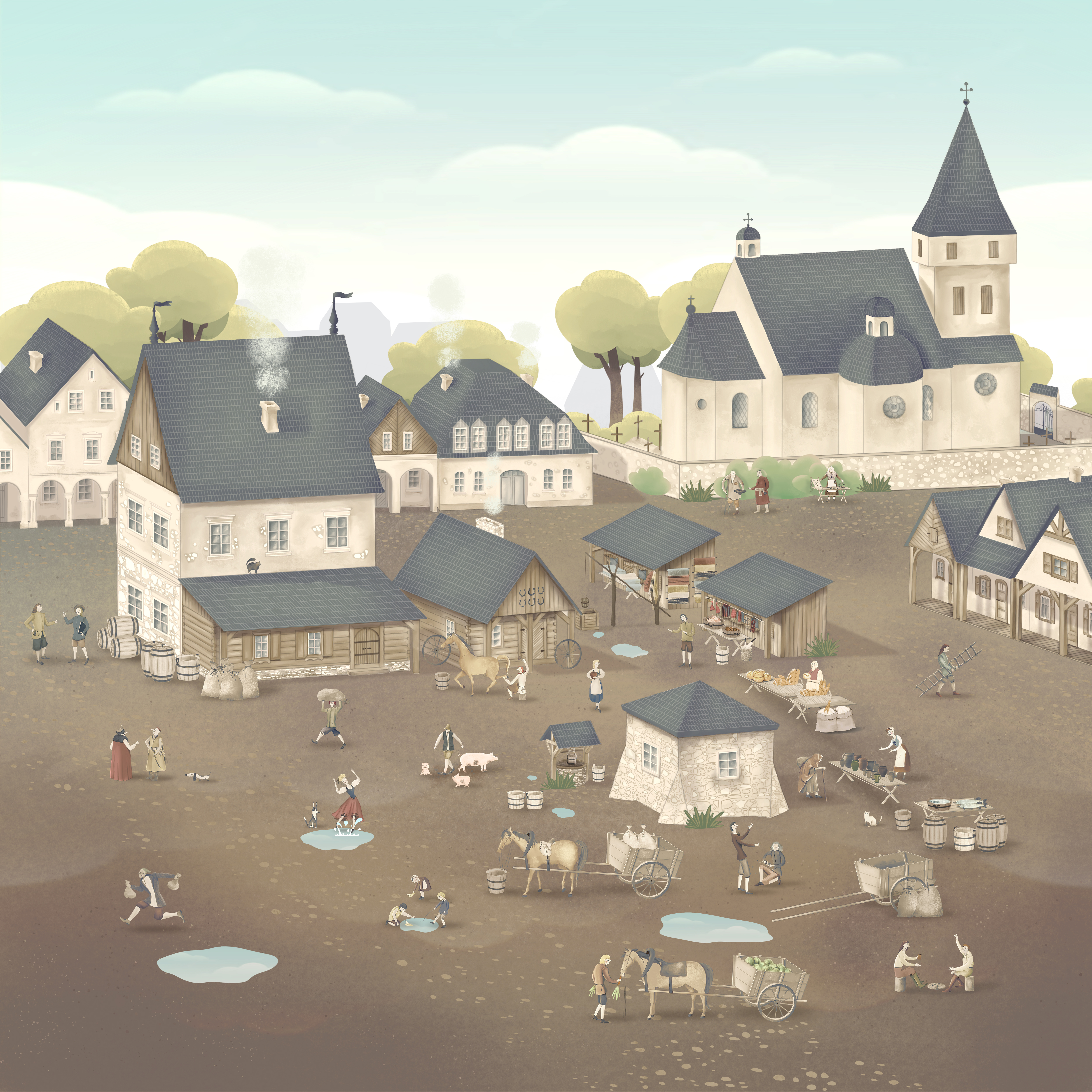 Councilor 1: So you're saying that this town seal fell out of the chest holding the town's foundation document by itself and... mysteriously plunged into the river! What else are you going to lose, Michal!

Councilor 2: Oh no! Master, are you suggesting that I took out the seal during the crossing! That we are like children?!... Oh no! The whole chest slid off the wagon... With all the documents. We spent three days searching... with no luck. We ought to write to the king. Ask for mercy and a copy of the foundation document.

Ouch, this makes the 95th silver coin. I will hide the pouch in the cemetery outside of town, no one will ever find it there. May Saint Barbara, patron saint of good death, guard it.

Nobleman 1: In Częstochowa, you will find variety of beers. In the town hall cellars they even serve beer from the city of Wrocław.

Doggie: And I wouldn't soak my mouth in beer, I prefer plain water.

Doggie: She'll be weeping again when her shoes get dirty in the mud... And you just... Guard! Don't bark!... She will shush me soon. Eh! Dog's life.

Lady: New stockings and garters! I look like a starost's daughter from Olsztyn. Hey!

Blacksmith: We'll change the horseshoes for summer. It's about time. Then we will get some limestone for building walls, we will go across the river to Zawodzie. Stand still...

I have to quit these pigs, the pay is good, but you can't work in a pigsty forever.

Could someone help me out of here? I will no longer sing about the Mayor! Promise...

All kinds of meat! Buy it, folks! Good sausages and hams, roast those fresh geese well, and add them to our sauerkraut! Finger-licking, I say!

Woman: Praised be. I need a new pot. And yet let its handle does not break!

Potter woman: My father fired it. It's sure to last.

I'll put the ladder on, Miss Sophie will show up on the balcony, then I'll steal a kiss, and her mother won't even know.

Oh! I'm stealing again, it's stronger than me, I'll have to confess in the monastery.

Little girl: Uncle Maciej was once by the sea, and he said that the water there was as deep as it could be and that someone had put salt in it.

Maybe I should quit eating mice?... A small fish is easier to catch and shorter to chase.

Well, well. He didn't pour me any water, instead he went to talk about politics.

Coachman 1: Then I told him: "Why did you build walls around the Monastery? Who's gonna attack us?" And he said that the Swedish king was arguing with our king about Livonia. From Sweden! Ha, ha! He actually said that.

Coachman 2: You made me laugh so hard! Częstochowa is far from the Baltic Sea. Recently starost Wolski sent iron ore for cannons to Gdańsk. These cannons sank many Swedish ships by Oliwa. Swedes will never near Częstochowa, it is as sure as the color of my beard.

Cabbage seller: I've got a treat for you. Here's a leek from distant Italy. Now you're eating it as if you were at Queen Bona's feast!

Horse: He's selling Italian greens again, all because of that Bona. Leek... celery... It's all the same thing all over... Pour me some horse fodder.

Player 1: - Poździech and Smogorz are gonna start a fight, and Marłek is gonna steal the pouches.

I'll lick my paw and then cross the mayor's path. Let them know who rules in the Market Square.

Try sauerkraut, it's what your fathers and grandfathers ate.

The city of Częstochowa on the Warta River was founded in the 14th century. The Market Square was an important part of the town, a trade center and a residence of the town authorities. It was rectangular in shape and its original size was about 175 x 65 meters. At the end of the 18th or at the turn of the 19th century, buildings were built in its northern part, thus reducing its size. On the south-west side, the market is adjacent to the corner of the church square, on which the St. Sigismund's church was built in the mid-14th century.
Probably until the mid-17th century, Częstochowa was surrounded by a system of defensive facilities in the form of walls, city gates or stone and earth ramparts. To this day, the Market Square has retained its appearance, and the layout of most of the streets of the Old Town has been preserved.